CHICAGO (July 1, 2019) – The South East Chicago Commission (SECC) announced twelve project awards for the 2019 Neighborhood Enhancement Grants. The SECC awards grants to neighborhood organizations that support beautification projects to enhance the quality of life in our neighborhoods and allow us to work together as community partners for the improvement of all our areas. The program is designed to enhance the physical attractiveness of the Hyde Park-South Kenwood, North Kenwood-Oakland, Woodlawn, and Washington Park communities. Since 1999, SECC has collectively granted nearly one million dollars in beautification funds since the program inception 20 years ago. This year’s program is sponsored by the Elizabeth Louise Smith Fund of the Chicago Community Trust, the Public Health Institute of Metropolitan Chicago (PHIMC), Hyde Park Kenwood Community Conference (HPKCC), Preservation of Affordable Housing (POAH), Hyde Park Bank (Wintrust) and individual donors.

For 2019, in partnership with Public Health Institute of Metropolitan Chicago (PHIMC), SECC two special Healthy Chicago 2.0 Community Seed Grants that are located within a ½ mile of the Greenline CTA stations, increasing community walkability and safety. Community walkability contributes to health and well-being by allowing residents to get places safely and easily and by increasing opportunities for physical activity and social connection. Examples of factors that affect walkability include sidewalk conditions, motorist and pedestrian behaviors, signage, perception of violence, neighborhood aesthetics, and nearby amenities.

The SECC and our partners are committed to improving the quality of life in the southeast lakefront neighborhoods, and we could not be more pleased with the response from the community. We received 26 applications for this year’s Neighborhood Enhancement Grant program, so there is clearly a need and enthusiasm for community beautification projects.

The grant selection committee, comprised of community members from the five footprint neighborhoods, selected the following community groups for the strength of their proposals and the breadth of potential impact. 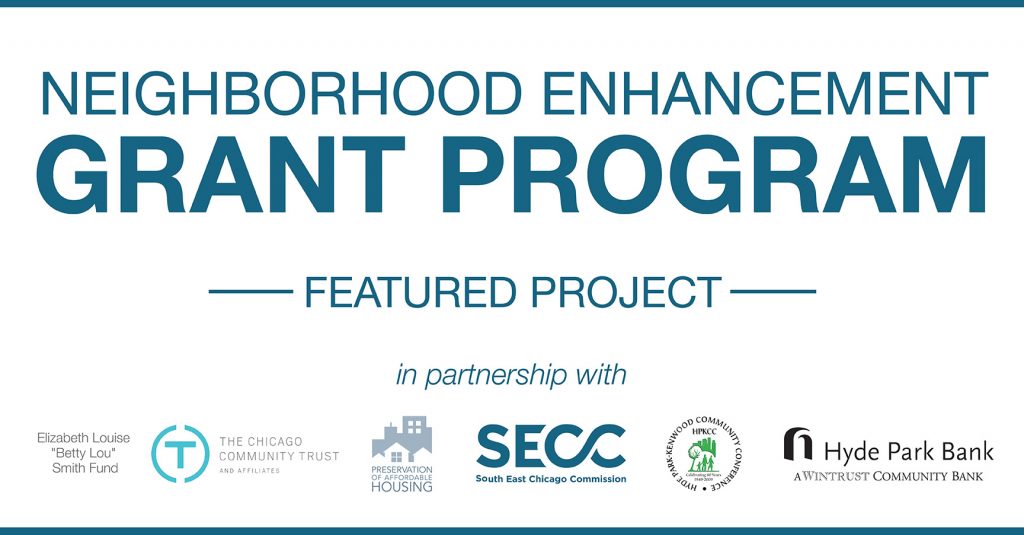 For more deadlines and information, visit our Neighborhood Enhancement Grant page. Or contact the SECC office 773-324-6926 for additional info.